Altering these settings may filter what you see.

Turn them off! Guide Brent in the darkness to turn off the light switches and go to bed.
Platformer - Puzzle
Lights Out

What a year eh?

Online, I'm just someone that's developing their artistic skills and sharing their work. IRL, I've dealt with a lot, but you're not here for that. This year marks the 10th year of my pixel art journey, lot's of inspiration from different games' art styles I really liked: Minecraft, SMB3 (All-Stars), Metal Slug, Mega Man, Shantae, M&L: SS, Sonic Mania, Terraria, Rivals of Aether. All these games and others are direct influences for my style, and that includes the animation aspects of them. As the years go by, I'm sure I'll find new games to take artistic inspiration from.

I like to think I reached a good point in my style that culminates all of those into one, but I still plan on improving it going into 2023. I have posted 16 works this year, totaling to 40, productive wise I could've made more, but that's a good number to cap off of, especially when you consider the fact that I got my first frontpage, thanks Fulp!

For about 2 years, I've been writing/composing music for CB:TLA (Crash Bandicoot: The Lost Adventure), for each song I learn new ways to make it sound not just good, but also authentic to Mancell's work from the PS1 trilogy, while studying his other works and influences on the side. There is a couple of tracks I would really like to share so be on the look for that soon. You are not ready for "Toxic Lab (Death Route)" probably one of my best yet.

On the side I've also made a few FNF esque songs, but I'd rather not get into those as they are kinda outdated for my taste, but still fun to listen back to after a while. Fairly recently I've dabbled into more atmospheric music for a game I'd like to make and publish next year.

In the beginning of the year, I tried to work a bit more on the game and implemented ice physics, yes they work like in CB2 where momentum holds even when colliding to a wall/crate (I promise I'll make it much more bearable here than the OGs). That's about all I did for January, for most of the year, I didn't really even delve into the code of the game until October, it was "Devtober" where each day you make progress on your game and plan out what you need to make for your game. I don't officially take part in it, but I like the feeling that other people are working at the same time as me, (there's a psychological reason for that).

Within that month I made a ton of progress with how the game functions, I can actually go into different rooms without recompiling the game, I implemented all the power-ups and tested the movement/physics for hours to get it to feel just like the OG games, but different enough to fit the game I'm making, and a new mode that I'll someday show that slightly changes the classic lives system to something, not easier, but different (No it will not be like CB4's system, they made it worse IMO). The hardest part was making the teleportation sequence when Crash spawns/teleports to another room. I think it took me about 1-2 weeks to get it to work the way I wanted it to since it involves some masking and blending. It was a pain in the ass, but I also learned along the way, that's the beauty of game development folks :D.

Like I said earlier, I'm satisfied with my style, but it could be better, as in I want to start drawing faces that don't look the damn same for each character. I feel like I've done well with other things like colors and shapes, but somehow I gotta change the way I draw faces soon so I'll have more room for expressions, (or maybe depending on critiques I don't plan on changing them.) There's not much to say for music as I just have to take the same steps before to be better.

I've been very quiet and careful with who I talk to online, but this year I really want to start making actual friends/associates and not just saying "I've met/have so many mutuals :D." There's a lot of good people on here than on Twitter so I plan to interact with the community more and maybe even make some games. It helps that I'm already a step into this goal seeing that there are people I'm interested in talking to have also follow me.

Nothing extraordinary, but I did get a weight vest as that makes losing calories/weight faster and walking more interesting, maybe I'll even run in it.

-Getting a driver's license (and maybe a job??)

Yep, my 21 year old ass still can't drive, or at the very least without a license. Why does it have to be me that lives in the only state that requires a written test you have to pass? Why do I gotta read words to drive Califucknia?! It's pretty essential at this age to get a job, just don't know where or how. I'm starting to give up on doing commissions seeing no one's really interested on Twitter anymore. Amazon deliveries are an option.

With all that said, this year has been okay to say the least (okay as in having an LSD trip for oral surgery and recovering for 2-3 weeks). Nothing bad like 20-21, but a few bumps on the road that still need to be taken care of. There's gonna be something special for Sophia's 3rd anniversary, (Jan 1st) so tune in for that along with maybe a blog about her. Cheers to 2023! 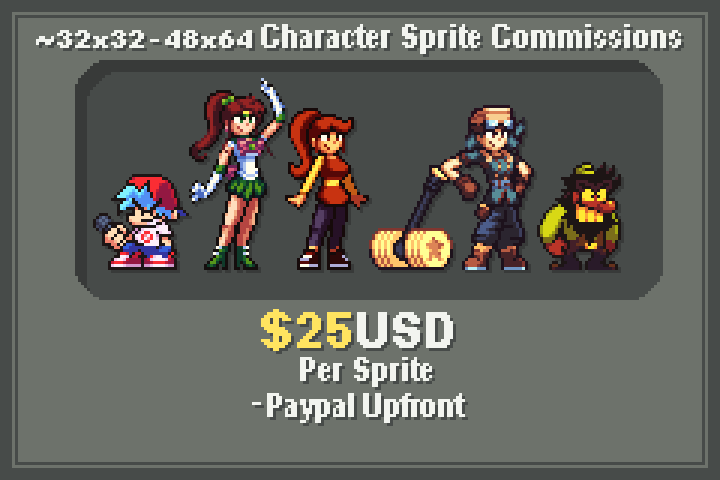 Commission me to draw any of your favorite/original characters!

A prototype showcase of my next commercial project, starring Gappy :-)
Platformer - Other
Gappy's Playground

Drill deep and dig up letters as fast as you can!!
Platformer - Puzzle
DRILLBIT!!